“The sun shone for the Aberfoyle Playpark opening on 29th May 2008. With Stirling Provost Fergus Wood and Councillor Paul Owens holding the ribbon, the Playpark was actually opened by the children of Aberfoyle, Gartmore, Port of Menteith and Inversnaid Primary schools. A competition was held amongst the local primary schools to name the Playpark, with Megan Simpson and Stephen McIlvenny selecting ‘Foylers Park’ as the winning name. Foylers Park took some time in the making. The vision for its refurbishment was originally conceived after the first Community Action Plan was published in 2004, with a £250,000 project including a skate park being drawn up by Stirling Council. However, the project was beset by problems, the first of which was that 3 leading members of the Play and Recreation Action Group left the area in 2005 and the project stalled.

The Strathard Community Trust, led by Maureen Campbell took over the project in September 2005 and a slimmed down Playpark began to take shape; without a skate park. Ultimately John Paterson and then Diana Carmody oversaw the completion of Foylers Park. Final works were completed just days before the launch.

The £75,000 playpark was funded by: The Big Lottery’s Awards For All Fund, Scottish Natural Heritage, The Hugh Fraser Foundation, Stirling Council, CERS and the Strathard Community Trust. A huge thank you must go to the team who organised the opening. Jackie Bell, Julie Glen and Lisa Smith arranged for the provision of the marquee, the bouncy castle, the presence of Active Stirling and the face-painting stand. It certainly looked as though everyone present had a great time considering that children were still waiting to have their faces painted after 6:00.” 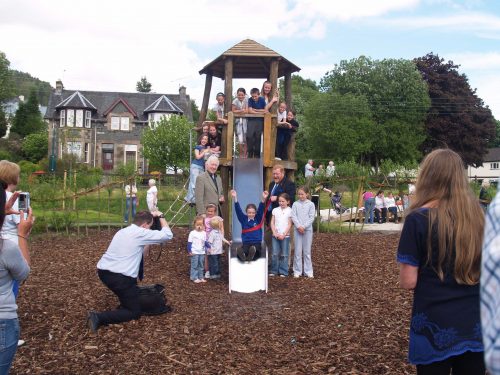 Since the upgrading of the Aberfoyle Play Park, completed in May 2008, it has been the Trust’s intention to provide a multi use games area (MUGA) for the older children. The Trust arranged a consultation in the proposal on the afternoon of Saturday 18th February 2012 in Aberfoyle Memorial Hall. Members of the Trust were present and illustrations of the proposed games area were on display.

Your ticket for the: Launch of the Aberfoyle Play Park [press release]